We are seeing a lot of the Pouch fungus, Cryptoporus volvatus, growing out of beetle-killed ponderosa pines, in the Arnold area.

Here are some details of the biology of the Pouch fungus, from  Martin MacKenzie, Forest Pathologist, at the South Sierra Service Area of the Stanislaus National Forest, located in Sonora California.

“The fungus is Cryptoporus volvatus; the pouch fungus.  It immediately tells you the beetles have flown.  This fungus has a special adaptation that allows it to shed its spores in the heat of summer at the same time as the first wave (sometimes the only wave) of beetles are leaving the tree they have just killed.  After the beetles (and blue stains) have killed the tree the Pouch fungus comes along and decays the sapwood of the now dead tree.  The fungus has a special covering (volva) over its pore layer, this layer prevents the spores from desiccating in the heat of summer.  The spores would not escape if there was not a pore at the back and on the underside of the  conk. The sun heats up the air in the pouch the air currents carry the spores out of the pore and they blow in the wind until they encounter a fresh beetle exit hole. The spores germinate and grow down the exit hole, through the bark and begin to decay the sapwood.

As an experiment in scaling I scaled up the size of the microscopic fungus spore until it was as large as a 3 inch ball, then I scaled up a bark beetle exit hole by the same factor and found that it would be as large as a 50 foot culvert.   Just as easily as I can throw a tennis ball into a 50 foot culvert, the fungus spore can fall into the hole left by an escaping bark beetle.

The 3rd slide in the attached PowerPoint might interest you.  It’s of a Ponderosa killed by the western pine beetle and the areas of flecked off bark is where the woodpeckers were once going after the late larvae and pupae of the Western Pine beetle.   That beetle moves into the outer bark before it finally escapes, to seek a new host.    The woodpeckers pounce on the tree at this stage and do their bit to reduce the beetle population.   But alas they do not take them all, they just make a living off them.

In this past couple of years I have seen what appears to be the pouch fungus fruiting just a few months after I realized that the tree was dead.   The truth is there were a lot of trees out there, that were dead, they just did not know they were dead.”

See this post about flat bugs living and breeding inside the fruiting bodies of ouch fungus.

The first photos (taken by Paul Cooper) are of dead, standing ponderosa pines, with the fungus fruiting bodies growing out of the tree. Lower photos are of a single mushroom, showing more detail. 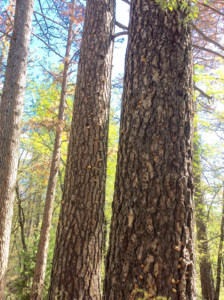 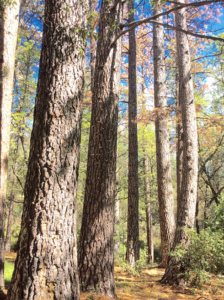 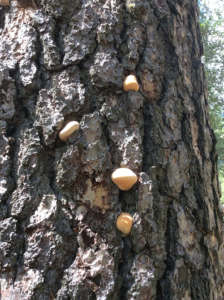 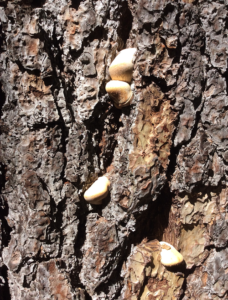