We received an email about the presence of hundreds of maggot-like insects in a garage, in the Springfield Road area (near Columbia), 2 August 2018. It appears there had been a migration the night before, from outside, and that there were many hundreds of larvae inside the garage. Service tech Jason Price responded, and brought back samples. They were tenebrionid larvae, often called mealworms, and are the immature stage of darkling ground beetles.

I returned with Jason, to examine the situation myself. This is the residence of Dr. Doug and Sheri Fleming. The exterior was very well maintained. A field, out beyond the driveway, was closely mowed, bone-dry,  and did not appear to present much of an environment for them. The ornamentals along the driveway consisted of small olive trees and rosemary. A cardboard mulch was used extensively, under the bark. I found a couple of dead, adult tenebrionids in that area, matching what we’d seen a few years before, in Calaveras County. It appears that the beetles and larvae were feeding and breeding in this strip along the driveway, maybe under the cardboard.

It was, indeed, the same species that had an outbreak in Calaveras County in August 2015. This was the first we’d seen of this odd-ball mealworm invasion in Tuolumne County. Mealworms, as a pest, is not something we experience.

I sent the photos to Dr. Rolf L. Aalbu, of the California Academy of Sciences, a top expert on the tenebrionids of California, (he co-authored the paper), who identified the beetle as Opatroides punctulatus, a relatively new invasive pest. Dr. Aalbu was also a co-author of the 2009 paper first describing this species in California.

That paper gave the discovery and first identification of Opatroides punctulatus in North America, from specimens collected on December 16, 2007, in Sacramento. The area of discovery was near the Sacramento deep water channel, and it is believed that the beetle was introduced to North America, in Sacramento, by way of cargo ships.

In 2008, further search showed that the beetle was present in four counties. This inspired the researchers to re-examine their collections, in which they discovered a specimen collected near the same area, in 2003.

The beetle is common in Europe, Russia, and the general Middle East region.

They report “In California, it is found under stones, leaf litter, scraps of wood, paper and fabrics on sandy clay soil in open disturbed sites.”

I soon was in communication with Dr. Warren E. Steiner, of the Smithsonian Institution, another co-author of the ‘discovery’ paper. Dr. Steiner provided a more recent, 2015, paper, “New Records of Three Non-Native Darkling Beetles (Coleoptera:Tenebrionidae) Established in California and Nevada, USA” coauthored with Dr. Jil Swearingen.

This paper reviewed the California counties in which Opatroides punctulatus had been recorded, and neither Tuolumne or Calaveras were listed. In this paper, they reported that this beetle was now common in Reno. From the paper:  “All Nevada specimens were found under rocks and leaf litter in urban roadside areas and often in curb garden plantings.”

This is an important section, cut and pasted, from Steiner & Swearingen paper: “The agricultural pest status of O. punctulatus was reviewed (Aalbu et al. 2009) with mention of its potential as a turf pest. The beetle could also become a household nuisance pest in North America. A fully winged species was observed in Israel to enter a dwelling “attracted by lights”  Kaufmann 1969) and soon after was found feeding on various stored foods. Kaufmann (1969) found O.  punctulatus to be omnivorous and “preferred meat to all other food”, including both raw and cooked meat of several kinds; on a diet of cereal alone, development of larvae to adults was proven doubtful, but those feeding on meat grew faster, larger, and with more vigor. Our observation of the cluster of beetles under a dead vole suggests that, while moisture may be the initial attractant, carrion may serve as food for the breeding of O. punctulatus in the field, given suitable soil conditions and other ecological factors. ”

On December 26, 2007, photos of this beetle were uploaded to BugGuide.net for ID. The ID was made by Dr. Kojun Kanda, another of the authors of the ‘discovery paper’. The specimens came from Cool, in El Dorado County. So the beetles had spread out quickly from Sacramento.

We have established now that the beetle can be a household nuisance pest, given the number of cases we have seen in both counties.

At the Fleming’s home, Sheri tells us that the larvae are attracted to light. She reports: “Last night we kept the lights off, but I walked the driveway with a flashlight after 9 pm and discovered they are migrating from the entire length of the driveway on both sides and coming up from the cardboard/mulch.  They are active at night – but Doug went out pre-dawn and there was no activity.  Incidentally, it is a very long driveway.  So the migrating population is in the many thousands. She also said: “They migrate to cracks and under objects.”  The best guess is that the larvae are searching for a better place to pupate.

For thoroughness, here is the Conclusion from the 2009 paper, Opatroides punctulatus Brulle´ now established in California by Rolf L. Aalbu, Kojun Kanda, and Warren E. Steiner.

“Opatroides punctulatus will likely become a common insect of lawns and turf in residential areas of central California and its spread to other regions should be monitored. Agricultural pest status may also need study; members of the related genera Ulus and Blapstinus have been known to damage seedlings (see papers discussed by Steiner 2003) in the southwestern states. In a translation from Russian, Medvedev (1968) lists O. punctulatus among ‘‘pests of consequence’’ and uses the common name, ‘‘cotton beetle’’ and adds that ‘‘In Transcaucasia and Soviet Central Asia the adult beetles and larvae damage melons, pumpkins, cotton, tobacco, cereals, vine, young seedlings. In Tadjikistan, it is found in granaries and barns.’’ In addition, Opatroides punctulatus was listed as a pest of cereals, cotton, grapes, melons, mulberry trees, pumpkins, soybeans and tobacco in the countries of Cyprus, India, Libya, Turkey and Russia (‘‘USSR’’) by Allsopp (1980) and a ‘‘dominant potential pest’’ of cotton in Russia (Sugonyaev 1994). The true pest status of Opatroides and necessity of taking control measures should be carefully evaluated. Like most tenebrionid beetles or false wireworms, Opatroides larvae are general feeders which may gnaw and feed on subsurface roots and seedlings. Economic damage may result only if these larvae become very abundant.”

Being that there is no common name for Opatroides punctulatus, and it is becoming a widespread pest species, we need a name. The Eurasian mealworm tells us it is an introduced pest, and what nearly everyone will notice first are the larvae, which look like mealworms. So we have it: the Eurasian mealworm.

There is a new pest in both Calaveras and Tuolumne Counties. They are presenting issues as a nuisance pest, often in large numbers, invading homes and garages, as they also did in Mountain Ranch and Valley Springs. This beetle is the second new invasive pest we have seen this year, 2018. We previously reported on the snail-case bagworm.

The research papers are added at the bottom of this post.

Below are videos showing:
1. how many were under a sofa being stored inside the garage. I want to make it clear that the beetle larvae were under almost everything in the garage.

2. Next is a compilation of night videos, taken 5 August 2018, at the Fleming residence, and then in other areas of Springfield Estates. We see in the night video, that both adults and several sizes of larvae, are out foraging. Along the driveway area, the density is high, but I found adult and larvae in an adjacent open field, 100+ feet from the driveway area. I also found adults and larvae, in lower density, along Bennett Drive as well, far from any house. We have video here that shows the larvae climbing up wooden fence posts, providing further evidence of their climbing ability. This leads me to think that Opatroides punctulatus is a nocturnal surface forager.

3. Feeding experiments. These show that Opatroides punctulatus is a nocturnal, general scavenger that prefers protein and fat, either as animal or plant. In this video, we also tested two insect baits: Maxforce Quantum ant bait, which was ignored totally, and Maxforce Complete Granular insect bait, which was readily accepted. 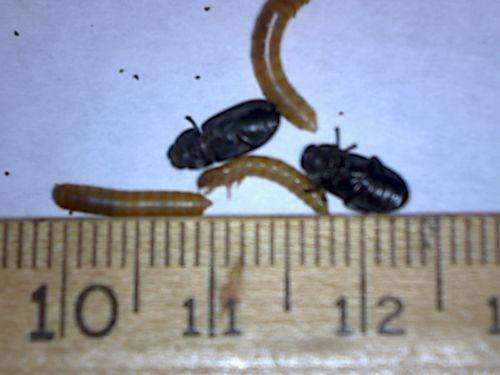 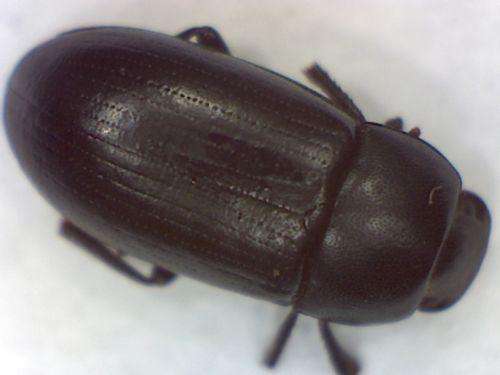 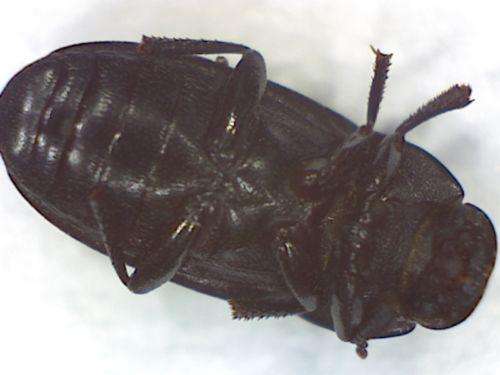 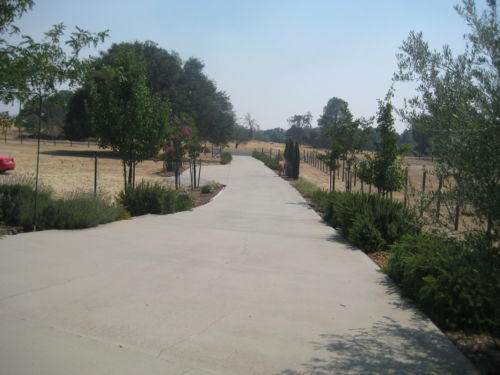 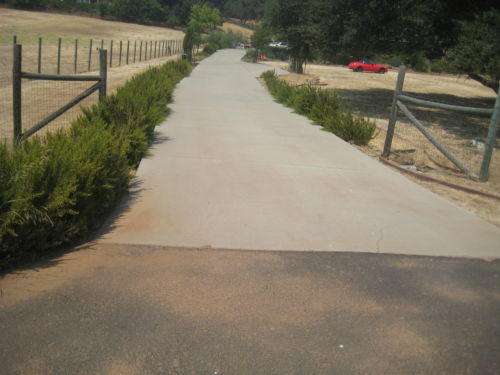